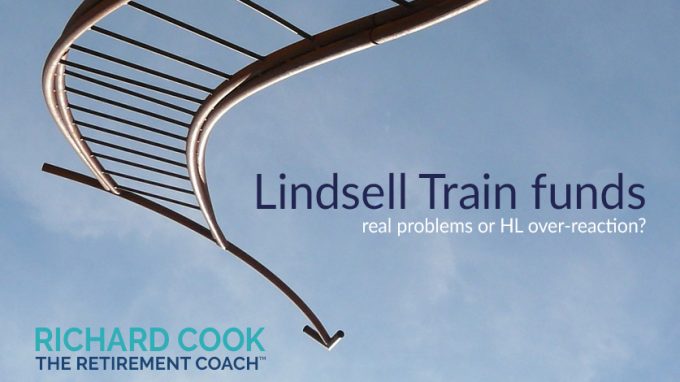 Hargreaves Lansdown have announced that two Lindsell Train funds will be removed from their Wealth 50 list of favourite funds.

Over-reaction is my conclusion. But why?

This all comes back to the Woodford debacle and criticism of Hargreaves Lansdown for keeping his funds in their Wealth 150/50 lists for far too long. It has been suggested that they became far too close to Woodford and did not have the systems and processes in place to identify that as a potential problem. I agree with that view and I am pleased to see that they have tightened up their processes.

The question is “why has that resulted in the removal of the Lindsell Train funds from the Wealth 50 list?”

HL suggest it is because of the fund’s large holding in Hargreaves Lansdown shares which represent 8.59% of a fund valued in excess of £7 billion. If those shares are performing well and contributing to the Lindsell Train stellar performance what is the problem?

I suspect the review HL have carried out post-Woodford has caused them to think that if anything went wrong with the Lindsell Train funds in future, and they were still on the Wealth 50 list, it could be claimed that they were only there because of their large holding in Hargreaves Lansdown shares so it is safer to take them off the Wealth 50 list now.

If that is the case, the funds have been removed from the Wealth 50 list not because they have become poor funds but simply to protect Hargreaves Lansdown’s back. It is not long ago that HL were explaining what good funds they were and why they deserved to be in in the Wealth 50 list.

This causes a problem for investors who have decided to have a basic strategy of only holding funds in the Wealth 50 list. A strategy, with the notable exception of Woodford, which has worked very well in the past.

I can see no reason for switching out of the Lindsell Train funds as long as they continue to perform but there are some structural problems which mean that their performance needs to be closely monitored in future.

All fund managers have to be allowed short periods of under-performance. As we found with Woodford, that only becomes a problem when enough investors lose patience and start to sell the funds in large numbers. This eventually caused the suspension of his fund because he had holdings in small companies whose shares were difficult to sell, and he ran into liquidity/cash flow difficulties.

Could the same thing happen to the Lindsell Train funds? Yes, but for very different reasons. If we take the UK Equity Fund this is a massive fund with holdings in only 20-30 companies, and more than 10% of the fund in just one company. Fine when the fund is doing well and growing. However, if performance declines, and investors start withdrawing, having to sell large numbers of shares in a limited number of companies could quickly escalate into a Woodford type liquidity problem,

One other similarity to Woodford is that Lindsell Train is largely owned by its two fund managers, so there may not be the oversight which would be present with many other fund groups.

All interesting stuff you may say but what should I do?

I am not a regulated financial adviser and nothing I say should be treated as personal advice.

I will continue to hold the Lindsell Train funds and treat them as an exception to my basic strategy of only holding funds in the Wealth 50 list. From now on I will be monitoring their performance very closely. If a fall in performance results in investors leaving their funds in significant numbers I will not hang around and will be out.

I will be monitoring this closely for those clients who subscribe to my “ongoing guidance service” and issuing regular updates. Other investors should ensure that they have suitable monitoring processes in place and that they do not take their eye off the ball.

Will a Woodford situation occur again in the future? Almost certainly. I had already identified the Lindsell Train funds as being theoretically at risk but only if and when their performance declines.